Do you need cherry blossoms?  Are you gonna die if you can’t find some?  Well, I’ve got cherry blossoms for you!  Here’s what’s in the collection (The flowers are actually peachy colored.  I guess WordPress recrunched the file to “web only” colors):

Here’s link to the vector art file for Illustrator.  Have fun and make something lovely!

In the future go to the Lovely Items Blog for more freebies.

As I post this, I realize that I have no where on any of my formal websites to display this stuff. Yeeks, I’ll figure out something by the end of the week. Anyhow, here’s the Haruhi wallpaper. I like this image of her with sheep (mostly because I adore sheep). So I made the image to look like it was cut out of paper.  Here’s the original image:

This was tough, because the image quality of the manga magazine was very poor.  I had to clean up a lot!

Here are some links to the nether regions of one of my websites. I’ll update this once I get something formal going.

Here’s an article from Wired about how the Twitter “Bird” was purchased from iStockphoto for $10 – $15.  Apparently some graphic designers aren’t happy about sites like iStockphoto and crowdsourcing in general.  This sounds to me like the same whining coming out of the mouths of developers upset about 99-cents iPhone applications.   With respect to this, the Twitter artist, Simon Oxley said:

“I believe a designer can only be ‘hurt’ when they stand in line — instead of constantly seeking new inspiration and producing new things with their ever-increasing experiences.”

I couldn’t agree more.  Sell your creativity.  However, I do believe Twitter needs to credit Mr. Oxley for his design on their website.

I’ve started a lovely items blog to keep track of my art. The URL is: http://lovelyitems.wordpress.com

This is what I’m thinking of doing a quicky home page place holder for Lovely Items.  I did this in Adobe Fireworks. 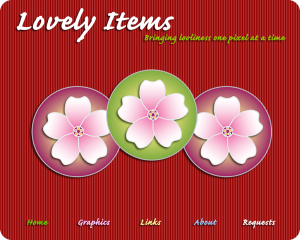 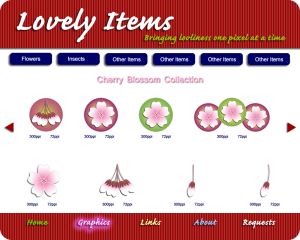 About Nothing in Particular